La Granda transforms its bovine in large and small cuts according to the needs of the consumer, reducing waste to a minimum. La Granda prefers to vacuum pack their meats, considering this the most hygienic, and economical way of preserving and selling meat without altering  quality and nutritive aspects.

La Granda doesn’t limit this service to Piedmontese bovine meat, but reserves the same attention for high quality in the choice and preparation of other bovine meats, pork and white meat.

La Granda supplies a range of meat products, ready to eat or utilized in all types of recipies, without renouncing to quality. La Granda sends its fresh and packaged products throughout Italy and abroad. La Granda reaches all culinary points, from actual restoration to wine bars, wineries, catering services and private clients. We are present in all Eataly stores. 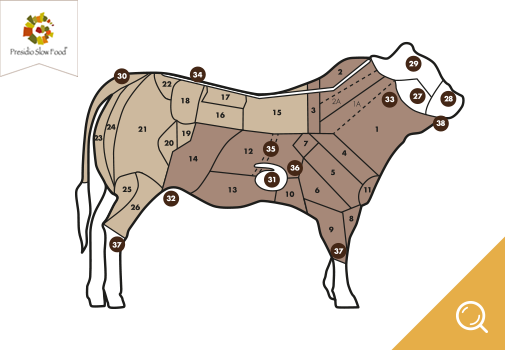 • Piedmontese Breed – Slow Food Presidium – Like all white native-breed cattle, this is an ancient breed, but the most interesting chapter in its history began in 1886. In that year, in the small town of Guarene d’Alba, a spontaneous mutation led to the birth of a bull calf with huge haunches and very muscular thighs, the progenitor of the current Piedmontese breed, known for its huge legs. In 1985, there were around 600,000 Piedmontese cattle, but today there are only about half that many, found mostly on family farms. Piedmontese beef is excellent; a good amount of intramuscular fat makes it particularly flavorful, and its cholesterol level is very low.

In the mid 1990s, Piedmontese breed numbers were rapidly falling as the farmers around Cuneo switched from the beef breed to milk-producing Friesians. The Presidium, born thanks to Sergio Capaldo, joined the remaining farmers in the La Granda association, which started a processing and marketing consortium. It currently has 70 member farmers, who follow a strict protocol, dictating natural feed (corn, barley, bran, fava beans and hay; no silage, soy or vitamin supplements) and slow growth. Butchers who have an agreement with the consortium package every cut with a label that gives information about the farmer, the animal’s characteristics and the slaughter date. 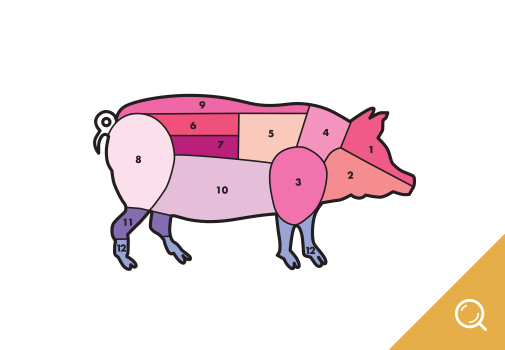 All our pork are born, bred and butchered in Italy. The selection has been made considering animal, human and environmental sustainability. • Carmagnola Grey Rabbit – Slow Food Presidium – This breed has soft, thick, gray fur, a little paler on the belly, the limbs and the end of the tail. Of medium size, with an elongated body and muscular loins, the Carmagnola gray rabbit produces a good amount of meat. Its bone structure is very fine, and its muscle mass is superior to that of other breeds. The meat is unusually white, tender and flavorful, and never stringy. Classically the rabbit is served with Carmagnola peppers. The animals are slaughtered when they reach a weight of between 3.5 and 5.5 kilos for the males, and between 3.5 and 4 kilos for the females. The breed’s delicate health and very thin skin makes it hard to farm.

This is the only Piedmontese rabbit breed of which any trace remains. It was still very common in the late 1950s, but then almost completely disappeared, until the launch of a genetic recovery program by the Zootechnical Sciences Department at the University of Turin and the Verzuolo agriculture and environment institute, with the indispensable assistance of the great Carmagnola restaurateur, Renato Dominici. Thanks to the Presidium, a number of Piedmontese farmers have now joined in a consortium and are successfully raising the rabbits.

Production area
Municipality of Carmagnola and surroundings, Province of Turin

Presidium supported by
Consortium of Piedmontese Poultry and Rabbit Breeds

• Sambucano Lamb – Slow Food Presidium – The Sambucana sheep breed has been farmed in the Stura Valley mountains since the 18th century. Suited to high-altitude pastures, it is medium-large in size and its limbs are thin, strong and not very long. It has no horns and the head has no wool. The breed is particularly prized for its meat, which is firm, flavorful, lean and rich in protein. The lambs are generally slaughtered when they reach 18 to 25 kilos. Though the period of highest demand is around Christmas, according to valley tradition the lamb is eaten from the end of October, when the Saints’ Fair is held in Vinadio. The lambs slaughtered during this period are called “tardun” and weigh around 35 kilos; born at the end of the spring, they have been fed on mother’s milk and Alpine grasses and herbs. Their meat is firm, flavorful and lean.

There were just 80 sheep in the valley in 1985, but the founding of the L’Escaroun consortium, the Lou Barmaset agricultural cooperative, the Pietraporzio ram selection center and finally, in 2001, the Presidium have marked the breed’s gradual renaissance. Today there are over 5,000 sheep in the valley and every year 10,000 lambs are born. They are raised on small farms, left to graze freely in the summer and kept in stalls and fed dry hay for the rest of the year. • Morozzo Capon – Slow Food Presidium – Morozzo capons are castrated roosters from the Morozzo breed. When they are mature they have a long black metallic tail and glossy brick-red feathers trimmed with blue or green. The cockerels are born in the spring and castrated in August, then roam freely for another four or five months. Their meat is tender and delicate, and purists enjoy is simply boiled and dipped in salt, or served with a typical “bagnet verde” (green sauce).

The popularity of this type of traditional chicken farming, once very common, began waning in the 1960s. By around a decade ago, it risked disappearing completely. But then the Presidium revived it, and the 300 capons registered in and around Morozzo in 1999 have now become 3,000. A consortium has united around 40 farmers, who each raise no more than 250 birds. They respect a strict protocol which specifies a natural diet and ample outdoor space. The historical fair, held on the third Monday in December, has also been given a new lease of life.

Presidium supported by
Morozzo Municipality, Consortium for the Promotion of Morozzo Capon and Other Traditional Fowls

• Piedmontese Blonde Hen and Saluzzo White Hen – Piedmont is home to two traditional chicken breeds: the Piedmontese blonde, also known, depending on the area, as Cuneo blonde, Villanova blonde, Crivelle red or Nostralina; and the Saluzzo white, also known as Cavour white. The blonde chicken has golden-tan plumage, a tall black metallic tail, a yellow beak and a well-developed crest. The Saluzzo white is similar, though its plumage is white and it is farmed in a very small area, corresponding to the ancient Saluzzo Marquisate. In the past, many farmhouses around the area would raise flocks of up to 300 chickens.

Industrial farming and intensive agriculture, particularly in the area around Saluzzo, arrived in the 1960s. As a result, these breeds, suited only to outdoor rearing, were superseded. The Presidium’s work to revive the breeds began thanks to the Verzuolo agriculture and environment institute. A consortium was started for farmers of the three native Piedmontese poultry and rabbit breeds protected by Presidia. The farmers follow a strict protocol which stipulates a natural diet for the chickens and outdoor spaces where they can graze.
Production area
Cuneo, Asti and Turin Provinces